Week One - Introduction to Crypto and Cryptocurrencies

Collision-free
Nobody can find x and y such that x!=y and H(x)=H(y).

Note: Collisions do exist. The possible outputs are finite(string of 256 bits in size), while the possible inputs can be a string of any size.

To find a collision of any hash function: Trying randomly chosen inputs and chances are 99.8% that two of them will collide. Well, it takes too long to matter.
For some possible H’s, there’s a faster way to find collisions; for others, we haven’t known yet.
No H has been proven collision-free.

Hiding
(r|x) means that take all the bits of r and put after them all the bits of x.
If r is chosen from a probability distribution that has high min-entropy, then given H(r|x), it is infeasible to find x.
High min-entropy means that the distribution is “very spread out”, so that no particular value is chosen with more than negligible probability.

Puzzle-friendly
For every possible output value y, if k is chosen from a distribution with high min-entropy, then it is infeasible to find x such that H(k|x)=y.

Hash as message digest.
If we know H(x)=H(y), it’s safe to assume that x=y.
To recognize a file that we saw before, just remember its hash.
It’s useful because the hash is small, while a file may be very big.

Commitment
Want to “seal a value in an envelope”, and “open the envelope” later.
Commit to a value, reveal it later.

To seal msg in envelope:
(com, key) := commit(msg) — then publish com
To open envelope:
publish key, msg
anyone can use verify() to check validity

Search Puzzle
Given a “puzzle ID” id (from high min-entropy distribution) and a target set Y,
try to find a “solution” x such that H(id|x)∈Y.
Puzzle-friendly property implies that no solving strategy is much better than trying random values of x.

Hash pointer is pointer to where some info is stored, and (cryptographic) hash of the info.
If we have a hash pointer, we can ask to get the info back, and verify that it hasn’t changed. 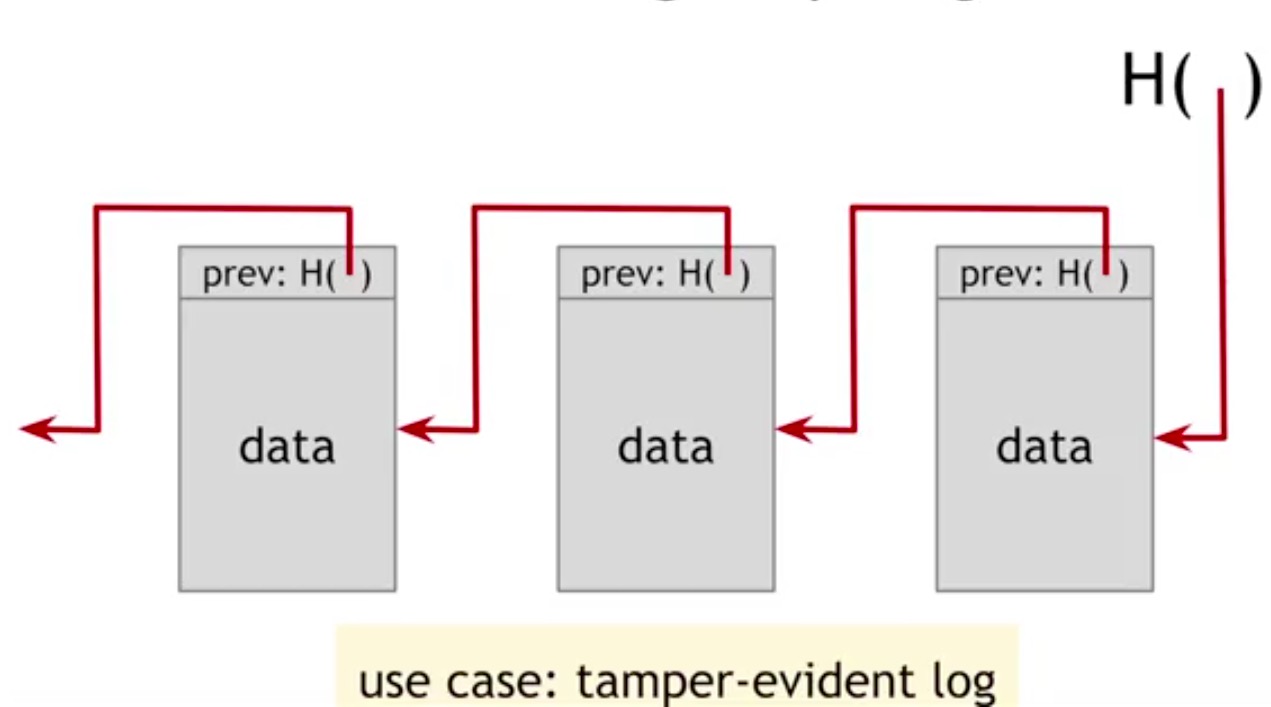 What we want from signatures is two things:

Requirements for signatures
·Valid signatures verify
verify(pk, message, sign(sk, message))==true
·Can’t forge signatures
An adversary who knows your public key and gets to see signatures on some other messages, can’t forge your signature on some message that he wants to forge it on.

A coin’s owner can spend it. 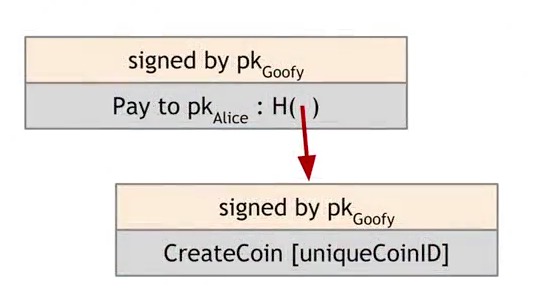 The recipient can pass on the coin again. 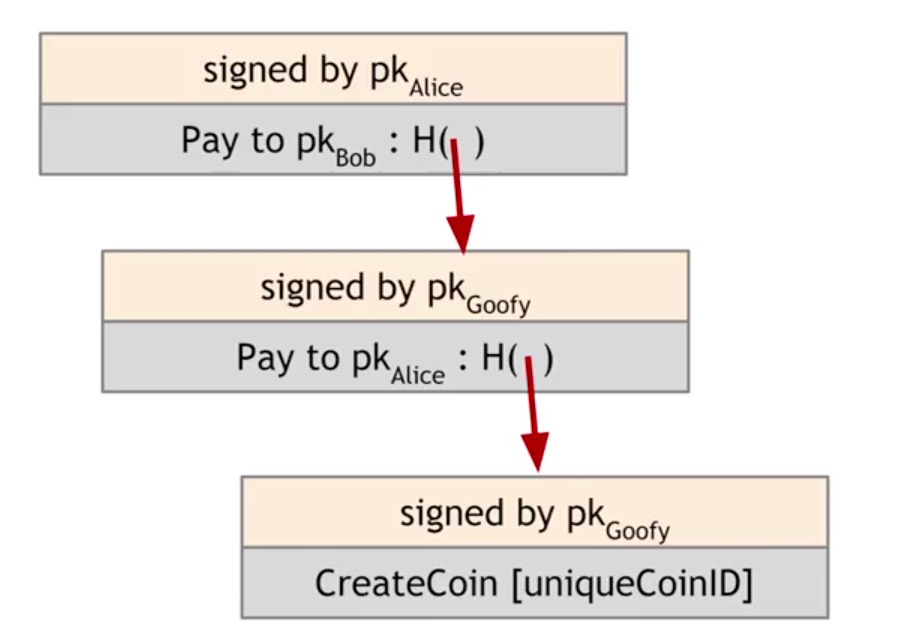 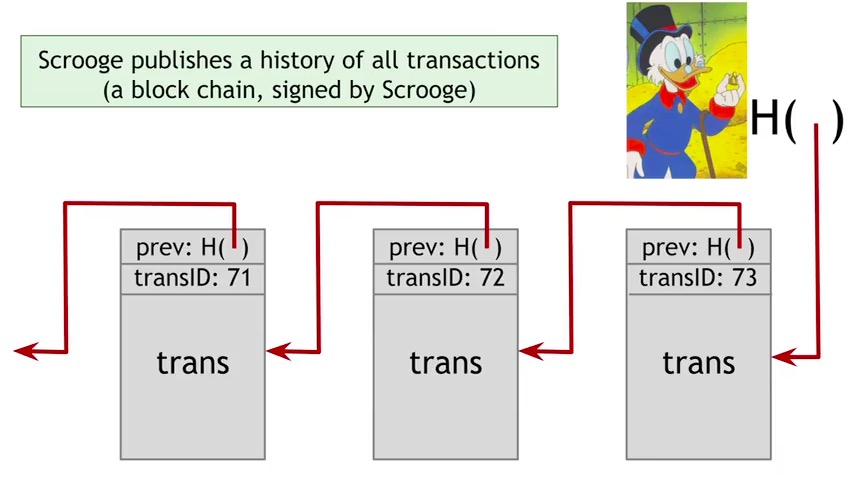 PayCoin transaction consumes (and destroys) some coins, and create new coins of the same total value. 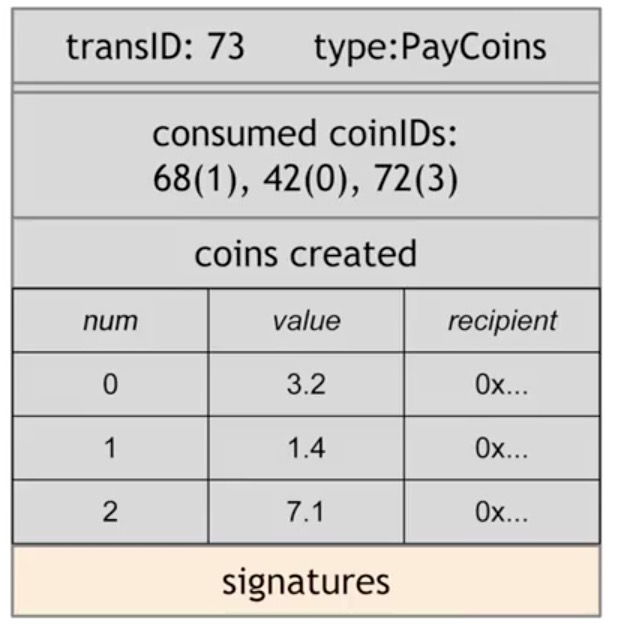 Note: Coins are immutable, that is, coins can’t be transferred, subdivided, or combined.

Why consensus is hard?
Nodes may crash
Nodes may be malicious
Network is imperfect (Not all pairs of nodes connected; faults in network; latency)

What can a malicious node do? - Double Spending 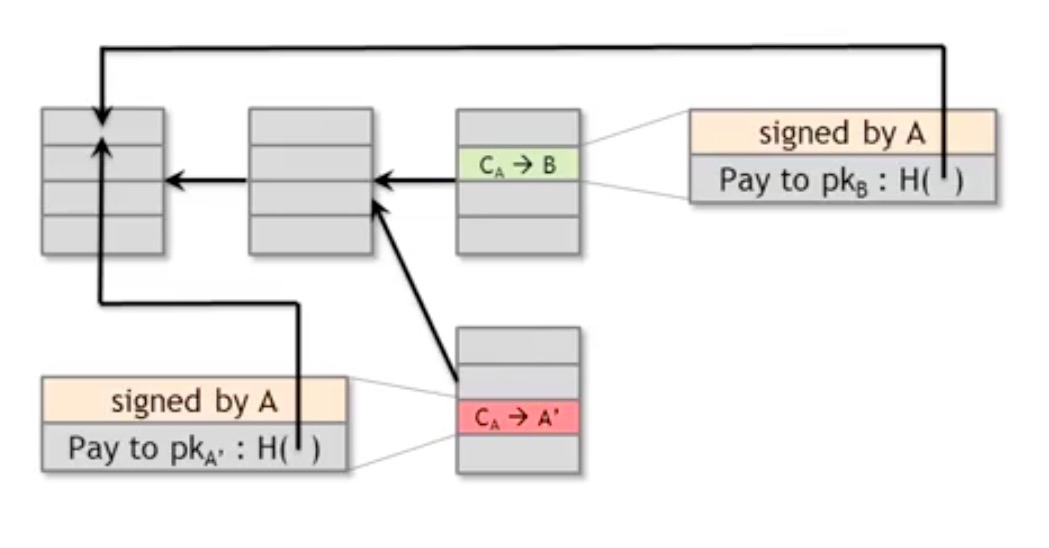 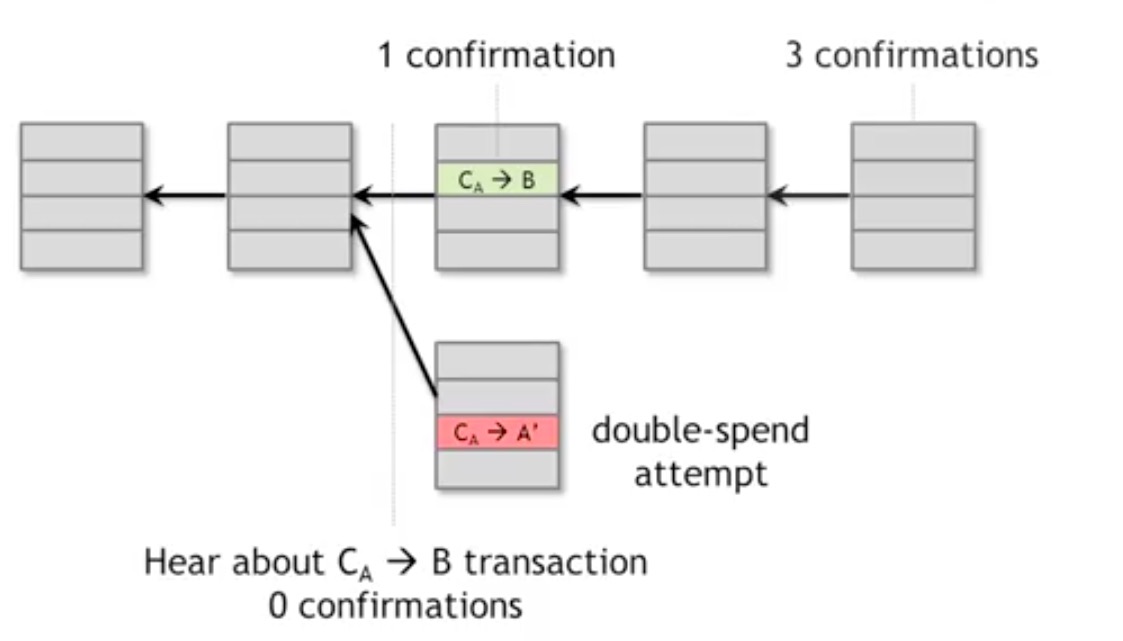 Incentives and Proof of Work

Incentive 1: block reward
Creator of block gets to

Note block creator gets to “collect” the reward only if the block ends up on long-term consensus branch.

Incentive 2: transaction fees
Creator of transaction can choose to make output value less than input value
Remainder is a transaction fee and goes to block creator
Purely voluntary, like a tip. 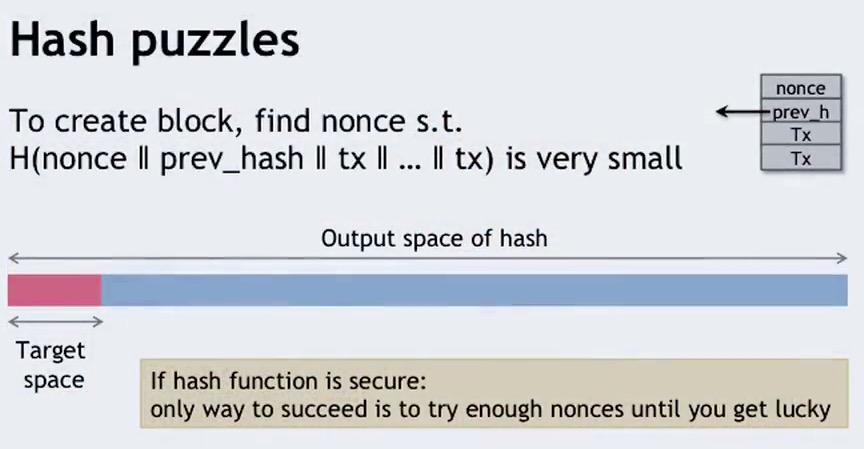 PoW property
1: difficult to compute
Only some nods bother to compute - miners

3: trivial to verify
Nonce must be published as part of block
Other miners simply verify that

Suppress some transactions?
· From the block chain √
· From the P2P network × 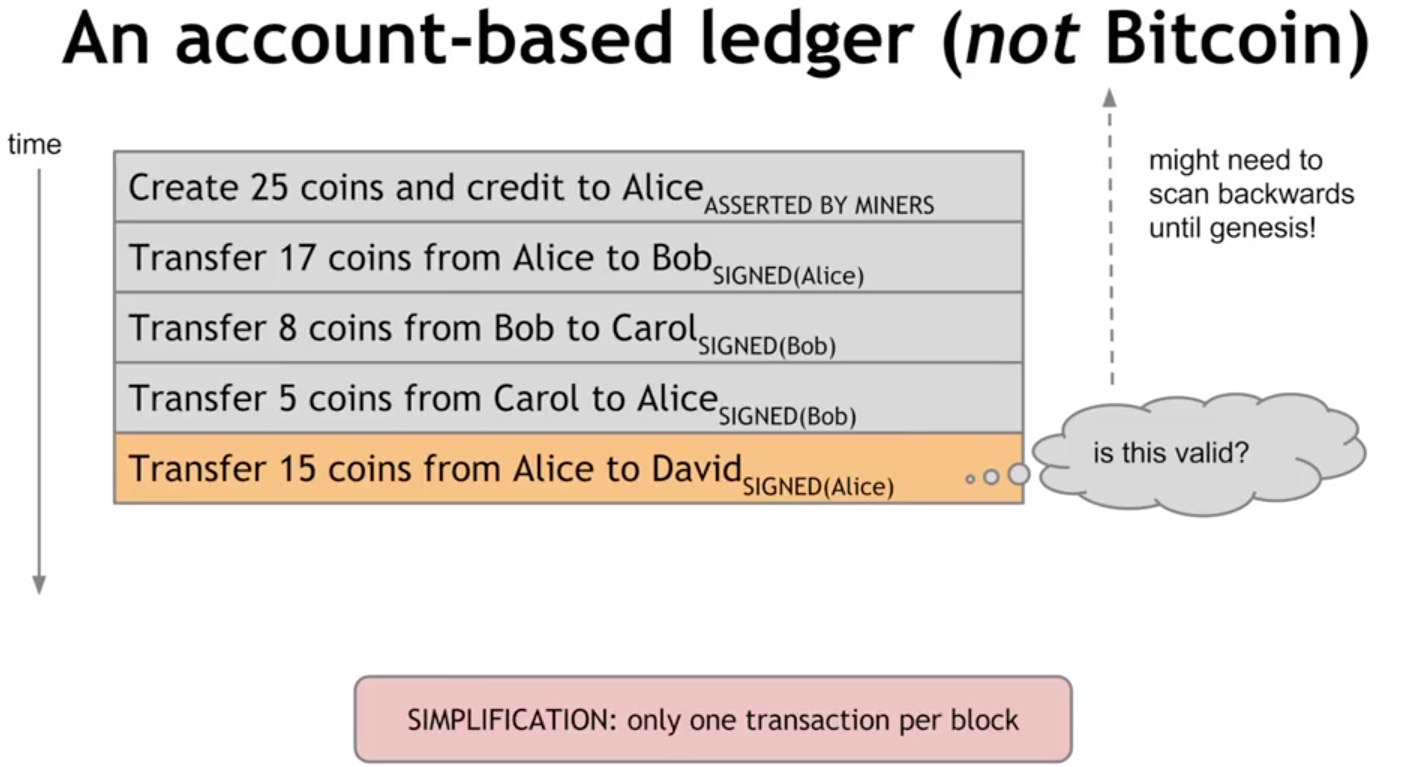 If we want to check whether a transaction is valid, we might need to scan backwards until genesis. That’s quite inconvenient and inefficiency. 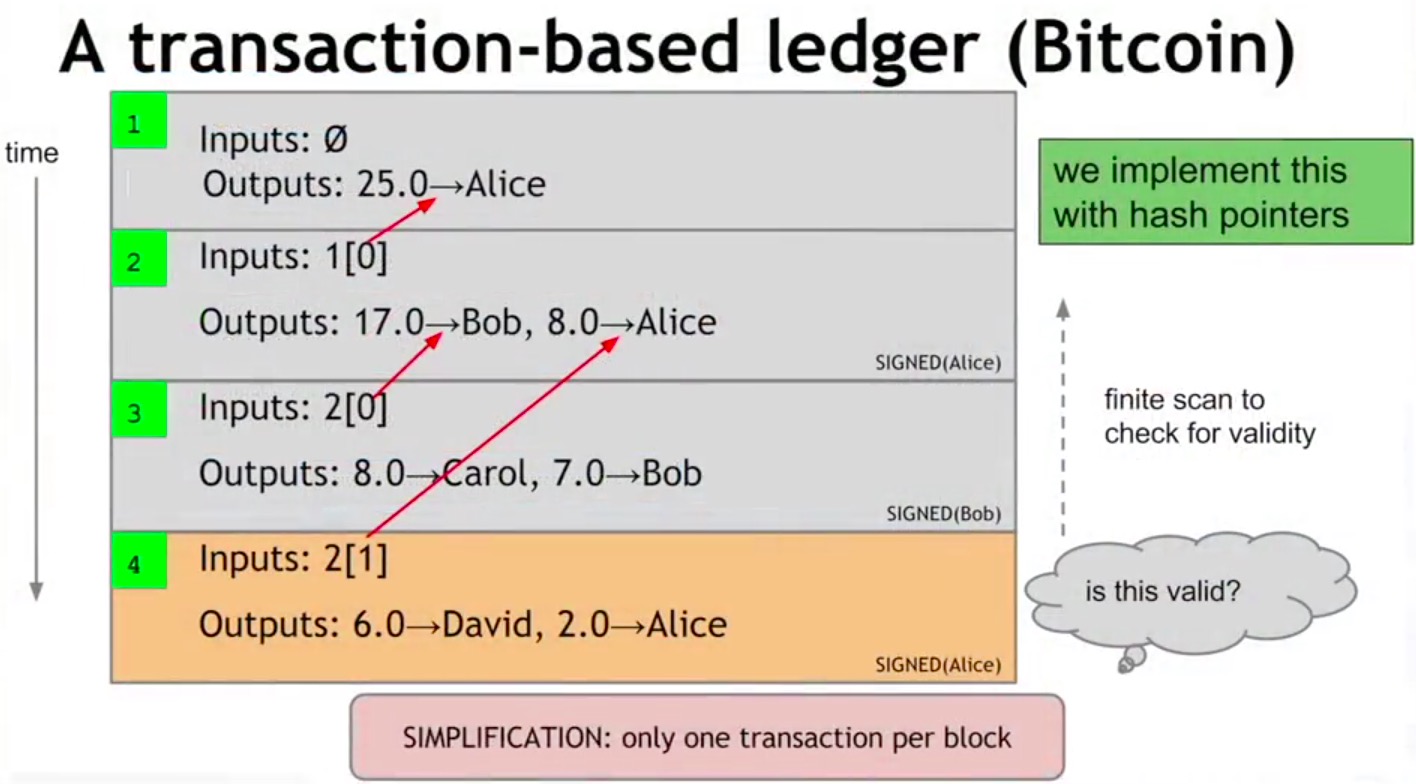 Then, we can easily realize functions like merging value and joint payments.
Merging value 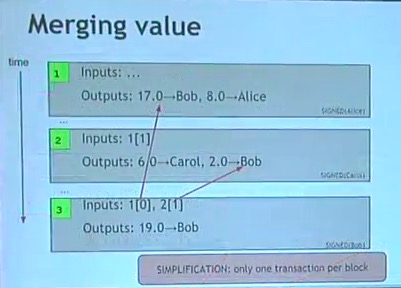 (The slides shown on Coursera has some mistakes, so I have to screenshot on the course) 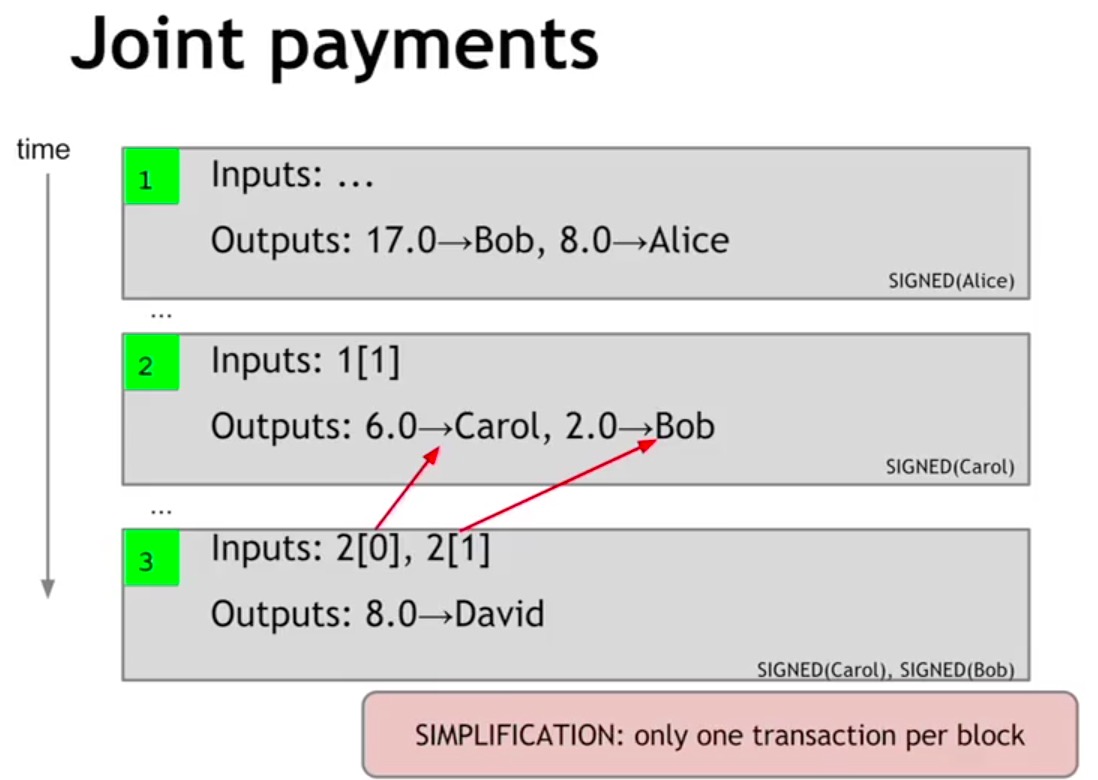 Note that in Bitcoin transaction, instead of assigning a public key, Bitcoin uses script.

OP_DUP : Duplicate instruction. Take the value on the top of the stack, pop it off, and then write two copies back to the stack.

OP_HASH160 : Take the top value on the stack and compute a cryptographic hash of it.

OP_CHECKSIG : Verify the entire transaction was successfully signed. Pop those remaining two items off of the stack, check the signature is valid. 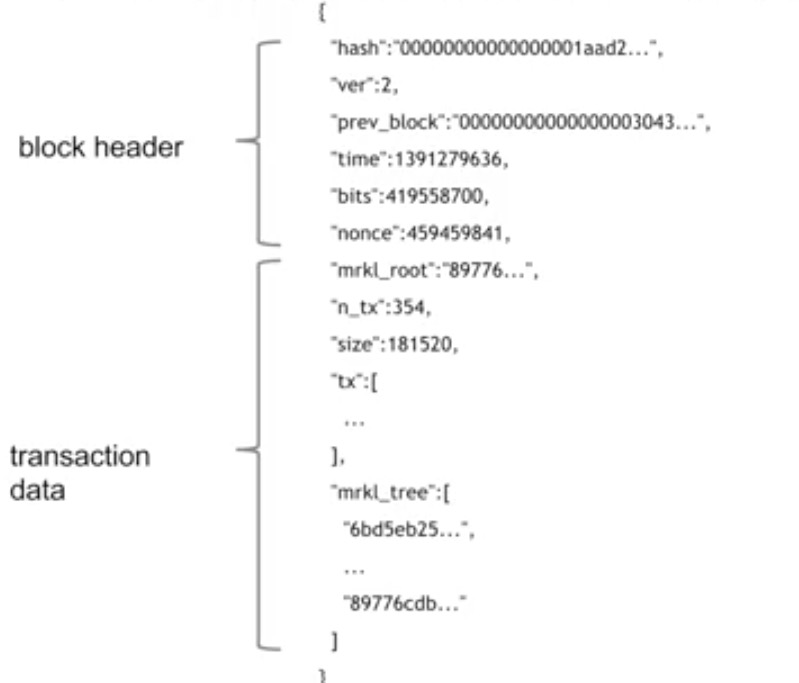 Since this transaction creates new coins, it’s prev_out has a null hash pointer.
Miners can put anything in coinbase.
The value is slightly more than the set value, which contains transaction fees.

Block propagation
Relay a new block when you hear it if:
· Block meets the hash target
· Block has all valid transactions - Run all scripts, even if you wouldn’t relay
· Block builds on current longest chain - Avoid forks

Hard-forking
If old nodes didn’t update software, they will reject all the new transactions/blocks.
Old nodes will never catch up.

Soft forks
Observation: we can add new features which only limit the set of valid transactions

Risks exist that old nodes might mine now-invalid blocks, since there’re new limits on blocks.

Advantages
· easily available, easy to set up
· parallel ALUs
· bit-specific instructions
· can drive many from 1 CPU
· can overclock

Pseudonymity: Bitcoin addresses are public key hashes rather than real identities
Unlinkability: different interactions of the same user with the system should not be linkable to each other